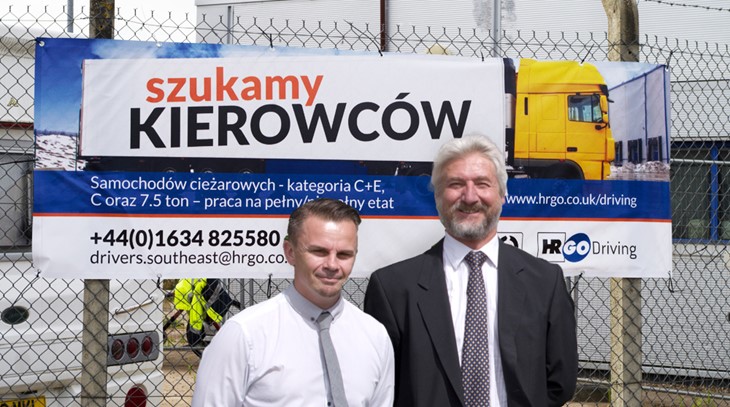 Shortages of drivers of heavy goods vehicles in the UK have prompted a recruitment firm with Polish links to target East European truckers.

HR GO Driving has teamed up with Ashford International Truckstop to promote the idea to drivers stopping at the complex. Large banners in English and Polish invite them to find out more.

Jack Parkinson, chairman, said the company was well placed to attract Polish and East Europeans to the UK to counter the worrying shortage of British drivers.

“Our specialist computer technology business in Poland is doing very well,” he said. “We know people in the transport industry in Poland and Eastern Europe and would be happy to help them.”

“Darren was very amenable and suggested I put up banners, as well as posters on the foyer job board at no charge,” he said.

Alan worked with HR GO designer Matthew White to come up with some eye-catching bilingual posters.

“We have a massive HGV driver shortage nationwide,” Alan added. “There is a lack of people going into the industry for various reasons, including the cost of training and the need to qualify for the Driver Certificate of Professional Competence (CPC).

“Older drivers are retiring rather than going through the CPC, and younger drivers struggle to fund training for their HGV licence. We are hoping this initiative will help the industry source new drivers.”

Darren Smith, who has managed the Truckstop for 12 years, said he was delighted to support local businesses in this way, especially as HR GO was trying to address driver shortages. “We’re happy to put up anything that helps the drivers and local businesses,” he said. “It’s great if it attracts more business and gives the drivers a new opportunity.”

HR GO Driving has also launched a scheme to help drivers qualify for lorry-mounted crane and other specialist licences free of charge. It also operates a driver incentive scheme to attract applicants.

A few months after HR GO Recruitment signed up to TEAM, the network of independent recruiters has created a new region.

Jack Parkinson, executive chairman of HR GO plc, uses his vast experience in the recruitment industry to offer his top 20 tips to anyone dreaming of a start-up.

There’s no need to panic about jobs. That’s the message to clients from HR GO Recruitment chairman Jack Parkinson after the shock Brexit vote. For most clients, it would be business as usual.