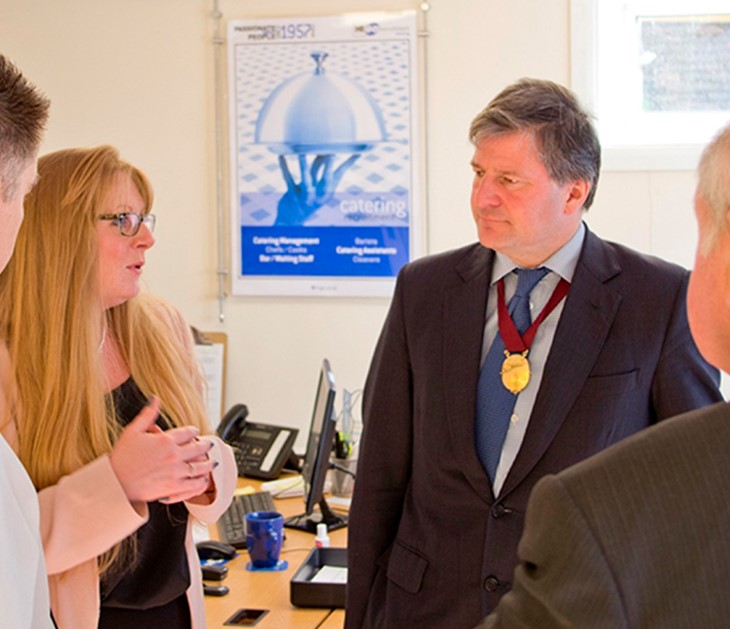 HR GO, the national recruitment business with branches across the county, has welcomed the High Sheriff of Kent to its Ashford offices.

Hugo Fenwick visited Wellington House in Church Road, the headquarters of the company founded in Dartford nearly 60 years ago, and its Park Street branch.

Mr Vidler has more than 40 years’ experience in the recruitment industry, including owning his own businesses.

Mr Fenwick, who lives near Ashford, spoke about his role as High Sheriff, a position that dates back to 669AD.

The honorary role lasts a year. During his term of office, which ends this month (March 2015), Mr Fenwick has promoted support for charity, young people and local business.

He was told about the history, achievements and challenges of HR GO, founded by Betty Parkinson in Dartford in 1957 when it was known as Parkinson Staff Bureau (PSB).

At the branch, Mr Fenwick met manager Tony Lock and his team, including apprentice Beth Cook-Naisbett, 17, from Charing.

Mr Fenwick said: “I was delighted to see such a flourishing business headquartered in Ashford.”

Mr Vidler added: “We were honoured to host a visit by the High Sheriff. In two hours, we talked about many aspects of our business. Although we now operate nationally, we are proud of our Kent heritage and Ashford base, and I was delighted to explain that to the High Sheriff.”